You are here: Home / General News / Is Your Baby Facing the Right Way? What You Need to Know About Changes in New Jersey Laws 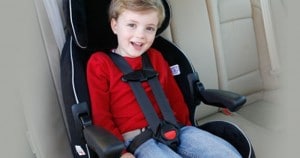 The new policy is similar to recommendations made and published in April 2011 by the American Academy of Pediatrics, which advised parents to keep toddlers in rear-facing car seats until age two, or until they exceed the height or weight limit for the car seat, which can be found on the back of the seat.

Some parents have already switched their babies to forward facing seats based on pediatrician’s advice and existing guidelines that were set before the new law. The changes may cause some confusion for parents, but the law basically says, if your child is under age 2 or under 30 lbs., you need to turn their car seats back around to be rear-facing.

One study found that children under two are 75 percent less likely to die or to be severely injured in a crash if they are rear-facing in their car seat. Another study found infants riding rear-facing are five times safer than forward-facing. A rear-facing child safety seat does a better job of supporting the child’s head, neck and spine in a crash, because it distributes the force of the collision over the entire body. It is simply the safest way to transport an infant or child. In addition to the new laws for 0-2 year olds, the revised law adds additional regulations with specific age and weight limits.

Ages 2 to 4: Children must remain in either a rear-facing or a forward-facing car seat with a five-point harness in the back seat of a vehicle at least until they are 4 years old or 40 lbs.

Ages 4 to 8: Children must remain in a booster seat in the back seat of a vehicle until they are at least 8 years old or 57 inches tall.

The new law increases fines for drivers who ignore the changes. Police can now issue $50 to $75 tickets to motorists caught with children in the wrong car seat or not properly fastened in. They can also no longer get out of a ticket claiming they were following the manufacturer's weight and age recommendations for their child's car seat. The new version of law has removed that stipulation.

Parents look forward to their children’s milestones; first step, first word, graduating to the next car seat. Making that change from rear-facing to forward-facing at one year was a milestone for parents. We now need to readjust our thinking and remember, when your child’s car safety is involved, sooner might not always be better.

Do not hesitate to call Best Local Attorney at 1.800.603.6833. All free legal consultations, whether via Internet or telephone, will be answered as soon as possible.

The Hayes Firm has been helping personal injury clients since the 1970s. Founder Bill Hayes has developed a national reputation for his truthful and approachable method of helping victims in need. Bill developed www.bestlocalattorney.com in order to offer his free lawyer consultation services to individuals all over the country. Because of his years of networking, he is able to find the best counsel no matter where the injury has happened.