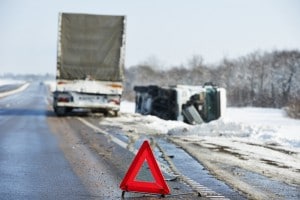 Newark NJ is one of the nation's major air, shipping and rail hubs. Less than 40 miles from our nations' largest city, New York City, Newark, and the entire region are known for having many big trucks on the road at any given time. A major shipping port area, trucks begin their journey's here by the thousands as they distribute goods throughout the U.S. Newark itself is home to a number of trucking companies which ship throughout the country and even as far as Mexico and Canada. While the majority of these trucks are well-maintained and driven by experienced drivers who are strictly regulated by the government, accidents still happen.

According to the U.S. Department of Transportation and the National Highway Traffic Safety Administration, in 2012 alone, there were over 3,900 people killed and another 104,000 injured in crashes which involved large trucks with a gross weight of over 10,000 pounds in the U.S. While the large number of those injured or killed in these accidents were those in the large trucks, 76,000 of those were occupants of other vehicles involved.
A study by the Federal Motor Carrier Safety Administration offered a compilation of the causes of these accidents. While most accidents are quite complex, the majority were attributed to the driver however, they are divided into four categories including:

Despite who is at fault, the results of a truck accident are generally the same, severe injuries and death often occur. If you or someone you love has been injured or killed in a truck accident in Newark NJ, we can help you. Located in Williamstown, we accepting new clients and invite you to contact us. For a free consultation, call us at 1.800.603.6833 or fill out the form below.

Our job is to help connect you to the best attorney in your area suited to win your specific kind of case. We do this at no cost to you.